We’re all aware of the consequences of dehydration to some extent. You may have experienced dehydration while trekking under the scorching sun, after running a marathon, after a celebratory drinking binge in Vegas, or simply because of insufficient hydration.

Whatever the situation may have been, you probably have some experience of dehydration. In its mildest form, dehydration may simply lead to fatigue, dry mouth, or dizziness, but in its progressive stage, it can lead to potential long-term complications, such as low blood volume, heatstroke, or kidney failure.

Some are a lot more likely to suffer from dehydration than others. If you’re a frequent traveler, professional athlete, or prone to drinking excessively, your body may lose more water (in the form of sweat, urination, etc.) than it consumes. The imbalance between water intake and water release leads to dehydration.

You may think you can simply drink water to treat dehydration, but that’s incorrect. When suffering from dehydration, you need to consume electrolyte supplements, usually found in recovery drinks. That’s where RecoverORS comes in, an electrolyte replacement healthy hydration drink made just for adults.

Below, we discuss the symptoms of dehydration, followed by a detailed description of RecoverORS, one of the best electrolyte-replacement hydration drinks in the US.

Are you suffering from fatigue, dry mouth, or dizziness? You may be experiencing dehydration.

Let RecoverOrs help you recover from dehydration so you can continue at your full potential! 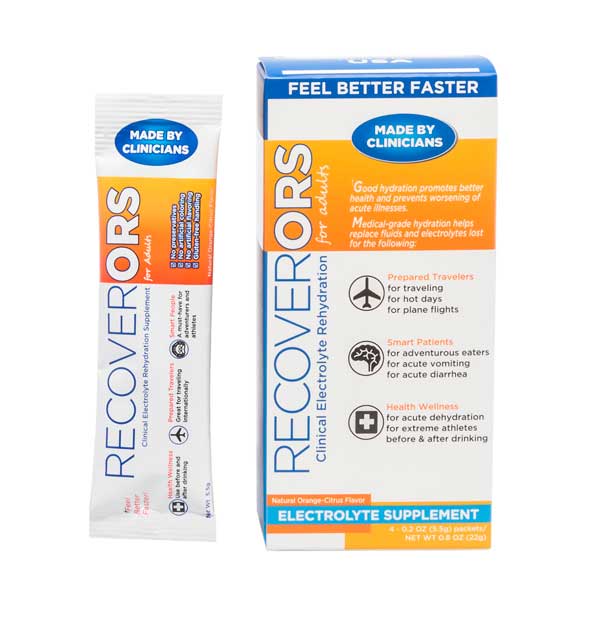 ARE YOU READY TO HYDRATE?

Most professional athletes, including race car drivers, swimmers, Olympic athletes, gymnasts, marathon runners, etc., suffer from mild or moderate dehydration at the end of a long and hard game. However, athletes often fail to recognize the onset of severe dehydration, so they must take active steps to remain hydrated, usually by consuming measured amounts of electrolyte drinks. Athletes have a higher risk of dehydration because they sweat a lot more, leading to significant water loss.

Alcohol is a diuretic, i.e., it makes your body release or expels fluids through the renal system, which is probably why you urinate a lot while drinking. Excessive drinking also causes vomiting, leading to further water expulsion. If you drink moderately, you can generally offset the fluid release by drinking lots of water. However, if you’re going on a celebratory drinking binge, whether it’s on a Vegas trip, after a wedding, or on the weekend, drinking water won’t be enough — you’ll need healthy hydration drinks to prevent dehydration and avoid a hangover.

People who work outdoors are exposed to excessive heat, generally in the form of direct sunlight, making their bodies release water in the form of sweat. That’s why UPS drivers, FedEx drivers, farmers, gardeners, lifeguards, and other outdoor-workers often suffer from fatigue, headaches, dizziness, and other symptoms of moderate or severe dehydration. If you work outdoors, you should carry electrolyte energy drinks to prevent dehydration.

Frequent travelers have a high risk of dehydration for several reasons, including the long airplane rides, time spent outdoors, and traveler’s diarrhea due to exotic foods. These factors lead to dehydration for different reasons, whether it’s the lack of water consumption, sweat, or diarrhea. As such, if you’re a frequent traveler, you should probably carry some hydration drinks to ensure your trips don’t suffer from a sudden bout of dehydration.

I recommend RecoverORS. Electrolyte loss from exercise may lead to frequent muscle spasm and cramps, which may significantly affect your performance.

I spend a lot of time golfing and fishing. I was looking for something that kept me hydrated that wasn’t all sugary and sweet. RecoverORS absolutely lives up to its hype. I’m on order #3.

Supplement to your Dehydration Treatment: RecoverORS

If you suffer from dehydration, drinking water may not be possible because your body will automatically expel it in the form of dehydration diarrhea or vomiting. The best way to treat dehydration in adults is through electrolyte replacement drinks, i.e., hydration drinks that replace the lost electrolytes.

RecoverORS is widely considered one of the best rehydrating drink for adults, professional athletes, frequent travelers, and others with a severe dehydration risk. It’s worth emphasizing that RecoverORS isn’t just another ordinary energy drink alternative, but rather a medical-grade electrolyte replacement drink formulated by clinicians.

RecoverORS is one of the top sports drinks high in electrolytes, containing 30% more electrolytes and one-fifths the calories, compared to most hydration drinks. Furthermore, it has low osmolality to ensure it gets absorbed faster and better than most energy drinks. 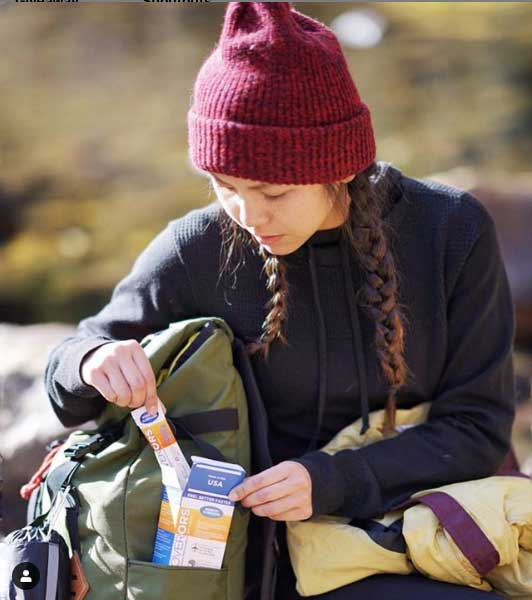 RecoverORS contains ONLY the essentials that your body needs for hydration. No extra sugar, no strange herbs, no unneeded fluff.
Purchase Now

When are sports drinks or electrolyte replacement drinks appropriate for hydration?

You should consume electrolyte replacement or RecoverORS, an alternative to sports drinks, before and after heavy exercises to ensure maximum water retention.

What drink replenishes electrolytes the best?

RecoverORS is one of the best alternatives to sports drinks for hydration. It carries over 200% more electrolytes than the leading sports drinks, while also packing one-fifth the calories.

What's the best way to hydrate yourself besides water?

How to help with diarrhea symptoms?

Diarrhea can occur because of various reasons, and it can be both the cause and symptom of dehydration. If you have dehydration diarrhea, you can help alleviate diarrhea-caused dehydration symptoms with an electrolyte solution that replenishes your lost electrolytes.

WATER MAY NOT BE ENOUGH TO HYDRATE.

Hydration is essential for your optimal health, stamina, and wellbeing. Try RecoverORS to aid in your hydration today!
Purchase Now